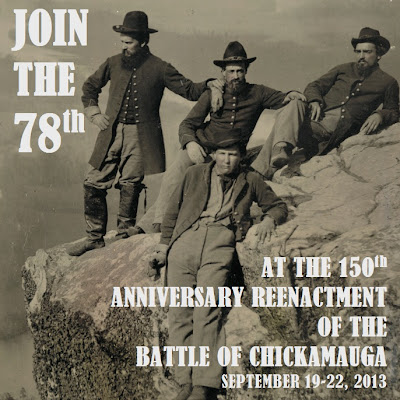 Visit our Chickamauga Company page for information on the mess that the 78th is forming to attend the Blue-Gray Alliance's reenactment!

I have the honor to submit the following report of the operations of our organization in the series of battles at this past weekend’s reenactment of the Gettysburg campaign, July 1-3 1863. The soldiers of our organization performed valiantly with Capt. A. Hooks, Cpl. Harkleroad, Pvts. Meinert, Hawk, Stasiak, M. Hooks, Berger, Huston, and myself as 2nd Sgt. Although getting around the massive site was difficult and limited by the extent of shuttles that the event offered, once settled into our company street things settled down. We fell in with men of the 63rd PVI, 23rd OH, and 69th NY and had an aggregate of 46 men at our largest in our fittingly sized company.

Despite our and assuredly Federal command’s best efforts, the scenarios in which we engaged were initially lacking in the weekend. Troop movements seemed confused in the first day’s battle, when we portrayed the 56th PVI to fire the opening infantry volley of the battle. Later, in a scenario reenacting Culp’s Hill, it became apparent that Confederate and Federal units were having difficulty reacting historically and appropriately to each other’s pressure. Nevertheless, as the 17th CT, we enjoyed initially pushing the Confederates from the field, as we did when portraying the 28th MA of the Irish Brigade in the Wheatfield on the second day, even if there was seemingly excessive downtime prior to our being put into action. This is easily overlooked though, since units might historically have been held in reserve and engaged. In this way, the number of reenactors, around 10,000, perhaps allowed for a more authentic experience, as we only portrayed one historical unit per scenario rather than ‘switching hats’ to return to the field in another unit’s stead. Engagements were able to proceed for hours without our being involved for a fraction of the time if at all, such as during the night of the second day when, as we camped on the stone wall near the angle, we could hear those forces on Culp’s Hill fighting into the late evening. I am happy to report that the company seemed to enjoy this experience despite short rainstorms and its time as the 14th CT, defending Cemetery Ridge against Pickett’s Charge on the final day. It was certainly a landmark moment, like the 150th Anniversary of the battle of Gettysburg generally, for all of us.

Col. Buffington personally and admirably rallied, led, instructed, and oversaw our men on multiple occasions throughout the campaign, and it was excellent to have him back in the field commanding.
On behalf of the soldiers, I would like to thank the civilians supporting the 78th PVI for their letters of support to our men, and gifts of food, candy, and supplies that were delivered in the field by Mr. & Mrs. Henry; a special thanks to them for that and the McLean family for their fantastic and heartfelt contributions.

I hope that despite the setbacks of the event and that some members did not take part in all scenarios, everyone enjoyed themselves. I apologize for my own failings as I realized them as a Sgt of a larger company and the greater responsibilities that come with it, and look forward to studying in advance of our next campaign to correct this, as I am certain we all aim to improve the company’s drill performance.

Report on Actions at Chancellorsville May 3-5, 2013

I have the honor to submit the following report of the operations of our organization in the series of battles at this past weekend’s reenactment of the Chancellorsville campaign, May 1-3 1863. The soldiers of our organization performed valiantly with Capt. A. Hooks, 3rd Cpl. Harkleroad, Pvt. Bello, newly recruited Pvts. Hudson and Isabel, and myself as 2nd Sgt. Although surprised by some organizational and administrative setbacks with registration, location venues, and scheduling, the 78th enjoyed its time in company and a fantastic ‘campaigner’ camp with our sister unit, the 63rd PVI, and in the ranks with guests from the 1st Minnesota.

We missed our overall commander of the 3rd USV, Col. Buffington, but Lt. Col. Peacock admirably led our battalion in scenarios that neither officer nor private expected to be as limited as they were because of the nature of the terrain that is penetrated by many major roads through the grounds surrounding the original battlefield. On Saturday, we portrayed a company in the 17th Connecticut of Howard’s XI Corps—those that were surprised by Jackson’s flank attack. In this scenario, our company was distinguished for its attempt to reenact this surprise by taking onto the battlefield camp equipment as well as putting up quite the fight as we fell back, taking cover in an entrenched creek bed as the rest of the battalion crossed a land bridge over it. 1st Sgt. Schwartzel (63rd PVI) personally rallied our line and superintended its fire after we were forced out of our protected position. In Sunday’s scenarios, the fights for Hazel Grove and Salem Church, we were honored to portray our sister company’s regiment, the 63rd PVI of the III Corps and protect its colors in the former, and portray the ‘Jersey Blues’ of the VI Corps in the latter.

Capt. Hooks expertly maneuvered our company into more effective fighting positions on several occasions as we continued to be pressed by Confederate lines and took heavy casualties.
I commend Cpl. Harkleroad on superbly and personally overseeing and attending to his squad throughout the weekend while urging historical authenticity in all scenarios.
To the men of the company, I grant my thanks for your unending patience and support as I continue to adjust to my new duties and responsibilities. Stepping into the position of 2nd Sgt was an arduous challenge, but an incredible honor for which I will be ever grateful. I look forward to our next campaign, and urge all to participate in the proposed drill to be organized the weekend prior to it (details to follow).


Please take a moment to review the updated Calendar of Events and Photos pages, including slideshows from our involvement in the Memorial Day Parade and Burtner House courtesy of members Mike and Jan Valasek!


If you have photos from other events this year, please hold on to them. I hope to post a tutorial in the coming weeks so that all members may log on to our Photobucket and upload their photos to streamline the process and give me more time to maintain the rest of our blog.


Members, please plan to attend our Annual Summer Picnic and meeting next Saturday! In keeping with the tradition, the group will once again meet for the gathering at Don Collar’s Burnt Ridge Campground in Cowansville, PA.  Please refer to the driving directions below for detailed instructions.


The unit will provide the meat and soda pop for the picnic.  Members are asked to please bring a covered dish, snacks, or a dessert to share with fellow members.  The picnic will start at noon.


Driving Directions:
1. Take PA RT 28 North towards Kittanning.  Upon approaching Kittanning, get into the left lane and follow the sign for US RT 422 West toward Butler/West Kittanning.
2. Merge onto PA RT 268 towards West Kittanning.  Follow this past the Franklin Village and Hilltop Plaza shopping malls.  At the bottom of the hill, stay in the left lane and follow the signs for PA RT 268 towards Cowansville.
3. Upon entering Cowansville, look for the Davidson’s Memorial business on the left side of the road. Turn left here onto Ridge Road.
4. Follow Ridge Road into the country and watch for the Burnt Ridge Campground on the right side of the road.


While at the picnic, please take a moment to thank Don for his hospitality! Looking forward to seeing everyone there!

Next Monday, the 28th of May, we will be marching in Freeport's Memorial Day Parade. As far as I am aware of from talk at the drill today, the details are as follows:

Schedule:
-Meet at Weaver's Grave at Freeport Cemetary at 8:00 AM.
-Will proceed to form up for the parade and Memorial Service at the high school following.
-Lunch at the VFW will follow.

Marching
-Marching will be in line and column (of fours, if possible), and maneuvers will include by-file left/right, wheeling, and about face for firing.
-Arms will be at the shoulder or right shoulder shift or port while marching.
-Eyes-right will be ordered when passing the grand stand.
-Parade rest will be of the lockplate in, feet in a T, and left hand over right type.

We appreciate your patience with us as we transition from our old website to this blog. Please feel free to peruse the site's various pages to learn about our organization and its hobby.

The 78th seeks to portray a typical Union Army unit of the American Civil War, in as accurate a manner as possible, thus promoting the learning experiences of its membership, the education of the general public, and the preservation of the past.